Kushner Real Estate Group is venturing into the Philadelphia market with a 1 million-square-foot, mixed-use development with its partner on several projects in Jersey City, New Jersey.

KRE Group, based in Jersey City, and National Real Estate Development said they had acquired the sites necessary for a master plan to connect the historic Old City and Northern Liberties neighborhoods in Philadelphia. The $500 million project is a joint venture between KRE Group and National, headquartered in Philadelphia, on behalf of 412-427 North 2nd St. Associates, a limited liability company.

“While we have done a lot in [Pennsylvania], this is our first development in the city of Philadelphia,” Jonathan Kushner, KRE Group’s president, said in an email to CoStar News.

The companies are touting the development as a project that will serve as a “gateway icon” for Philadelphia because of the assemblage’s visibility from adjacent Interstate 95. It includes four parcels that will be developed in phases, “creating a new mixed-use, pedestrian-centric neighborhood” located on North Second Street between Callowhill and Spring Garden streets, both companies announced Wednesday. 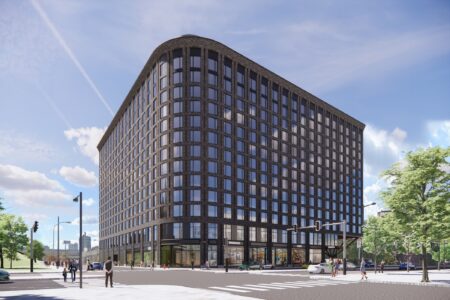 “We’ve had our eye on the Philadelphia market for a long time, waiting for the right opportunity to create something iconic that will have a lasting positive impact on the city and its residents,” Kushner said in a statement. “We’re so fortunate to have secured this portfolio of properties in this prime location along with our partner, National, which has deep roots in the city of Philadelphia and invaluable insight into what makes this area so special.”

The first phase of the East Callowhill Overlay District project in Philadelphia will include two residential towers, 200 Spring Garden and 412 N. Second St., that will incorporate street-level retail. Each will include ground-floor landscaped public spaces where residents and neighbors will have access to street-level restaurants, bars and shopping.

“The site is incredibly well located in a neighborhood celebrated for its walkability and seemingly endless offering of authentic dining, drinking, shopping and cultural options,” Kushner said.

Both 200 Spring Garden and 412 N. Second will feature amenity packages that include a private elevated urban park that encompasses a pool, multiple grilling stations, community gardens and a private outdoor dog run.

The partnership has retained the architectural firms Handel Architects, Morris Adjmi Architects, and Major to design the project.

“The vision for the development is to create an authentic and vibrant community that naturally connects Northern Liberties and Old City,” Daniel Killinger, president of National Real Estate Development, said in a statement. “We are confident the East Callowhill Overlay District has the potential to be a vibrant live, work, play destination and will set the tone for future transformation of the industrial neighborhood to the west.”